Graduating from roping to a pack and camping horse, former pacer My Shadow Strike has now been elevated to “hero” after being instrumental in a family surviving floods that swept Lockyer Valley.

My Shadow Strike was invaluable for owner and equine chiropractor Anthony Cootes and his family when their property at Black Duck Creek, about 45km south-east of Toowoomba, was cut off in the second week of May.

Flood waters made it impossible for vehicles to pass and, with supplies running low, the only way to exit and enter their property was on the back of My Shadow Strike.

With diminishing food and fuel reserves, Anthony and My Shadow Strike set off on a four-kilometre round-trip mission to gather supplies. 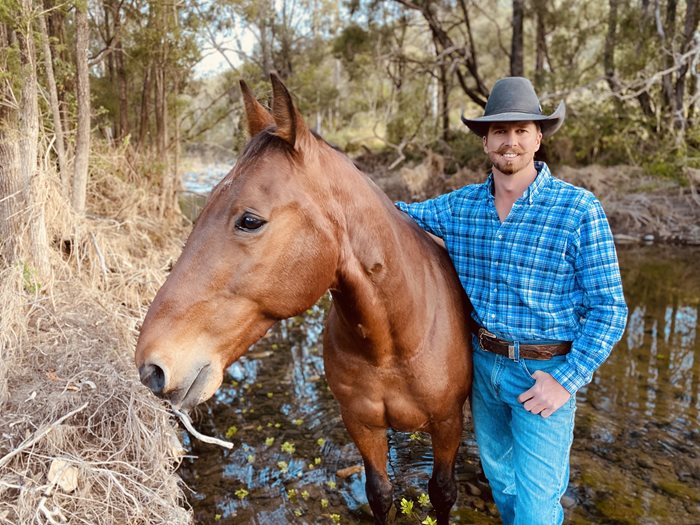 “Black Duck Creek runs through the middle of the property and when it floods, we are cut off from town and that has happened a few times, but it was not as bad as it was in May,” Anthony (pictured with My Shadow Strike in Black Duck Creek) said.

“Some people had their supplies choppered in.

“So, once the big rush of water had gone through, it had destroyed all the crossings and roads and the water had gone down to a safe level, we put a packsaddle on Striker to cross the water.

“We had someone from town meet me on the other side of water with groceries, nappies and all the things we needed, and it was about two kilometres each way.

An eight-time winner in a 158-start career under top trainer John McMullen, the 12-year-old gelding was retired in December 2016.

The following January he was rehomed with the Cootes’ family (pictured with My Shadow Strike on far right) on their remote and large rural property and given the stable name Striker. 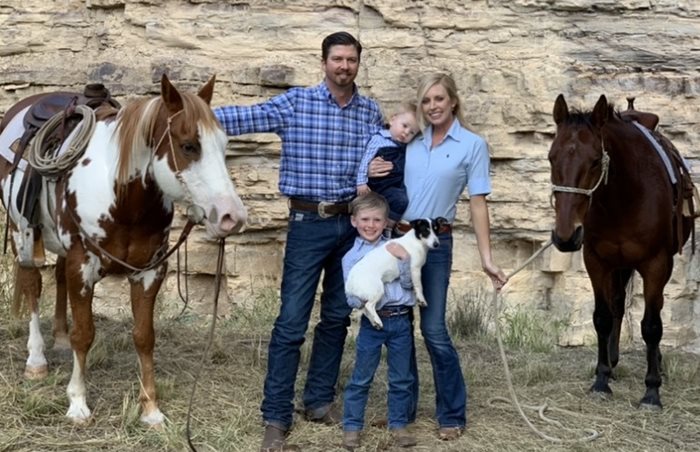 Having lugged a sulky and driver for several years around the Albion Park and Redcliffe circuits, and predominantly over 1780 and 2040 metres, he made one of his longest ever treks in May.

My Shadow Strike’s versatility and handling has advanced remarkably since he arrived at Black Duck Creek, Anthony said.

He was initially going to be a roping horse for cattle but as time progressed, Anthony realised Striker had a lot more to offer than just pulling a calf.

“The original reason for wanting a standardbred was that friends I knew who had them, said they had a lot of pulling power for a rope horse...and they are required to pull a cow or a calf,” Anthony said.

“And, that’s because they are used to pulling a gig with a driver.

“But when I got him and realised just how well-minded and well-mannered he was, he had potential with the right training, to be a lot more.”

The training task was breaking My Shadow Strike in, Anthony said.

Having only ever drawn a sulky (pictured leading the field at Redcliffe) he had never been ridden with a saddle let alone being given commands to suddenly turn left right or halt on a short rein.

“Gallopers start under saddle as a relatively traditional way a horse would start, whereas standardbreds are not given that opportunity, but it didn’t take long at all for him to get used to the saddle,” he said.

“The most difficult thing was teaching him flexion and body control, which is being able to flex his face around from left to right and be soft in the bridle.

“It helps you control them and bring them to a stop and turn them.”

In his post-race career under the saddle, and besides being a hero at home, My Shadow Strike is also a star of stage and screen.

For nine days he appeared in two shows at Ekka, the twice-daily Queensland Off-The-Track ‘Horsing Around Show’ (pictured) and nightly in All The Pretty Horses spectacular run by renowned horseman Dave Manchon.

On the small screen, he made a cameo in the music video for Drew McAlister’s 2018 single Australian Heartbeat. 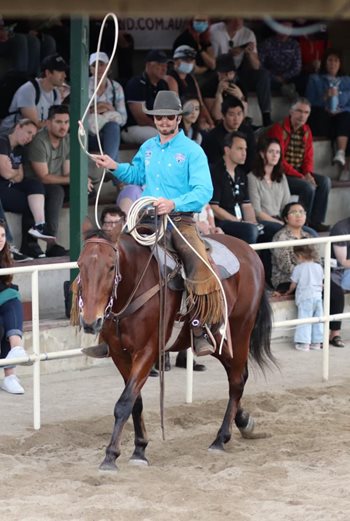 Anthony said Striker was the perfect ‘poster boy’ for budding young riders looking for a show jumping, equestrian or even a trail horse.

“A lot of these young riders tend to go for thoroughbreds and maybe they're a little bit more athletic,” he said.

“Striker will jump nearly anything that you put in front of him and chase cattle in the hills.”

However, these days, Striker is more of a pet than a workhorse with Anthony’s six-year-old son David his main rider, underlining how well tempered and patient the Albion Park winner is in ‘racing’ retirement.

“It comes back to the trust as I would never put my child in any sort of threat or danger,” he said.

“These days the most riding Striker gets is my six-year-old son.”