Racing returns to Burnie this weekend, part of two harness meetings with racing on Sunday night in Hobart. Trainer/driver Mark Yole is a big fan of the picturesque Burnie track and does his best to steer punters into a few winners there in Make your Mark.

I’m really looking forward to this drive as this bloke tends to fly the stand and I’ve been waiting for him to get to these conditions at this track. Outside the front he should ping on top and prove very hard to beat. Clear best chance.

The old warhorse just continues to keep racing consistently. He broke through for a win under similar conditions to this race in Hobart last week. Although it’s unlikely that he will lead with the fast beginner Christian Major drawn inside him. He will still get away well, settle handily and run his usual honest race. He has a good record at Burnie. A great top three hope

Wish I was in the sulky

Although he doesn’t have the best of form, he comes up with a lovely pole draw which is crucial around this tight track. He should be able to hold the front and in a race that looks to lack depth, I don’t see a lot of pressure so he should dictate the tempo and breakthrough.

Not one that I am training or driving but this horse has caught my eye at the trials. It’s having its first race start here. He trialled very nicely at Burnie against older horses, where he won off a cold sit. Then trialled at Carrick last week against arguably one of the best 2YO’s in the state, only being beaten a metre. This race looks a very suitable first start and although it’s a touch awkward the draw, if Charlie can get him into a nice spot he should be right in the finish.

This week we head to Burnie for the first race meeting of the season. I personally can’t wait to get back up to the North-West Coast. This picturesque racetrack looks right out into Bass Strait.

This very small unique track is approximately 590 metres in circumference. Most are stand starts. It takes some real skill to win there and years to master.

Being such a small track it is a distinct advantage to be in front and most winners will come from there. As a driver it is particularly tactical if you are back in the field as coming wide is very difficult, especially if they have not gone hard up front. You really need to feel the speed and make your moves wisely.

You will often see some roughies filling the placings along the pegs. I have had some success taking off and catching the leaders off guard, however this is very much a high risk, high reward move. If you don’t get around, you will be caught wide and most likely ruin your chances.

I also love the atmosphere as the crowd is usually good and they are right on the fence cheering. 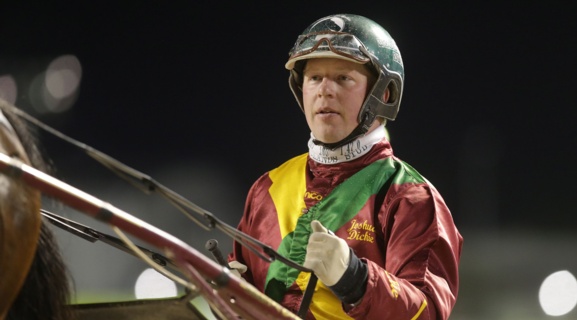