Star mare Jeradas Delight to race into the sunset More than 12 months on from Jeradas Delight’s stunning The Golden Girl triumph of 2021, owner and breeder Ray Cahill still almost cannot believe it.

The NSW-based Cahill can recall his mare battling to win races at Parkes in the middle of 2020.

And, amazingly, around a year later, she was a Group 1 champion.

The fairy-tale journey of Jeradas Delight, Cahill and trainer Jack Butler as well as driver Brendan Barnes will come to an end in the Sunshine State this week, with the mare about to call time on her career.

She will have her final start at Albion Park on Saturday evening – which is the third event of the program over 1660 metres – where she has drawn the inside gate.

The winner of almost $250,000 in career stakes will not immediately call time as a race horse following Saturday night, she will have a few more runs in NSW over the next few weeks.

But, Saturday’s contest will see her farewell the place where she thrived as a pacer, in Queensland. 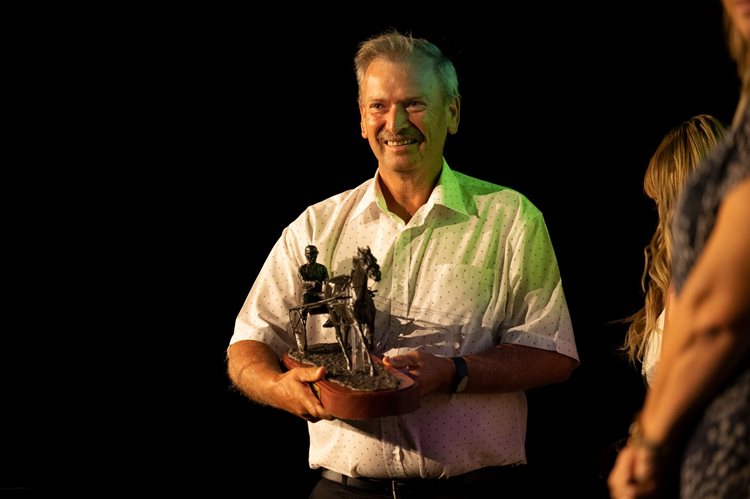 As Cahill mentions, Jeradas Delight was a fair horse in NSW - finishing as the runner-up in the 2018 Group 3 NSW Breeders Challenge Regional Final as well as a third place finish in the Group 3 Go Girlfriend Final at Menangle – but she was hardly setting the world on fire.

“In one year, she went from running second at Parkes to winning a Group 1 race,” he says.

“I was over the moon and still am.

“We had no expectations of what Jack was going to do with her.”

Jeradas Delight capped off a stunning 2021 season after securing the top accolade at the TAB Queensland Harness Awards.

Cahill was a proud man at the function, clutching his trophy that his star mare had earnt.

It was a master stroke from Cahill to give his mare to Logan Village-based trainer Butler.

“I have to thank Ray for giving us the horse originally, she has done a great job, given us our first Group 1 winner so it means a hell of a lot to us” Butler said when the team claimed the TAB Queensland Harness Horse of the Year.

“It is absolutely amazing.”

Cahill had never dealt with Butler or had a horse with his stable before Steve Turnbull suggested the owner-breeder send the mare to Brisbane with Butler.

And, while Butler most certainly got Jeradas Delight going smartly in the Sunshine State – collecting a handful of victories early on – even a Group 1 triumph was unimaginable for Cahill.

The mare’s trainer had other ideas.

“I never got involved or told Jack what to do – I do not believe in that sort of stuff – I just leave it to him,” Cahill says.

“I am still to this day I cannot believe it; she could not win a race at Parkes before she left.

“He told me that she would go on an compete with the top mares – this is seven or so months before she did win the Group 1 – he told me that and she did.”

The decision to soon retire the seven-year-old mare may surprise some.

"She seems to be a better horse than last year, I think," Barnes said on the eve of the recent carnival.

Since she came back from a spell ahead of the 2022 carnival, she has won once as well as being placed on two other occasions, from half a dozen attempts.

That included running third while trying to defend her title in The Golden Girl. 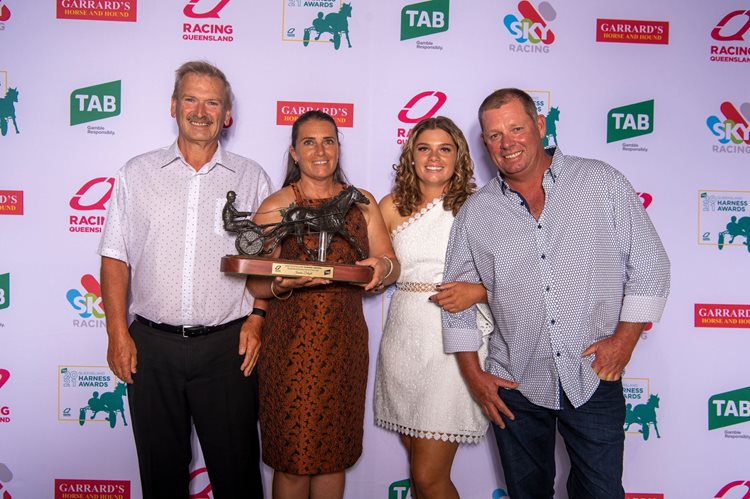 Jeradas Delight is hardly battling to be competitive, with her retirement not being forced, but Cahill, who has long been in the breeding game, can see a long-term vision.

“A mate of mine recently asked me why I was retiring her as she is still racing so good,” he said.

“I just think maybe I can get something just as good or even better than her in the breeding barn."

He raced the mare’s mother - Jerada Ace – as well, who he eventually gave away.

He already has plans to send Jeradas Delight to Captaintreacherous and will do so in partnership alongside Jackie Gibson at Success Stud.

“She is going so well but it is the time,” Cahill said of Jeradas Delight’s imminent retirement.

“My intentions are that she will go race in Sydney for about a month to try and get a time next to her name at Menangle with a couple of mare’s races coming up.

“That will be it after that for her and then she is off to Success Stud.”

All Cahill’s mares are based with Jackie Gibson at Success Stud. 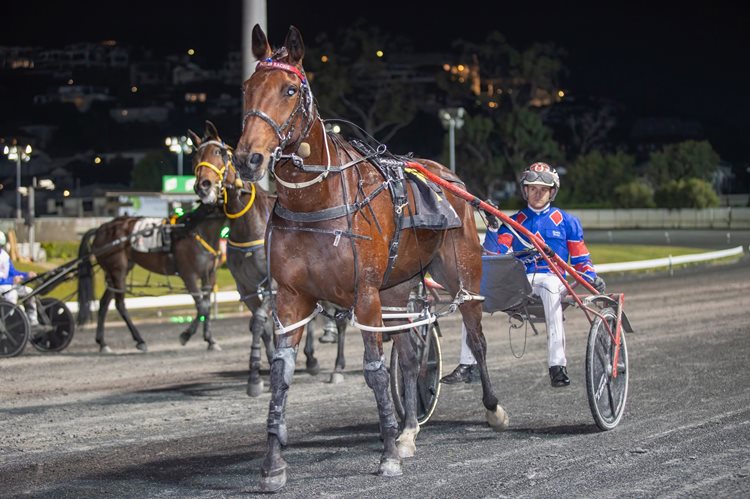 He has long had an affinity with the Gibson family and their standardbred business, starting with Jackie’s father John.

“He father, I loved her father, he was great and he always made you feel good,” he says.

“He was very good at what he did John.”

Jeradas Delight will soon retire as a Group 1 champion and like her early racing days in NSW, her time as a race horse did not start promisingly.

Cahill had long raced horses with Victorian man Jack Eichhorn before his death some time ago.

While they were in partnership with their standardbred’s, Cahill and Eichhorn rarely actually saw each other in person, often speaking on the phone about their plans for their next crop of horses.

When Eichhorn passed away, a half share in Jeradas Delight was handed to his son, John.

John did not want to take on the mare so Cahill was left on his own.

“No one really wanted her and I just took her on myself,” he remembers.

“From there, she just went on and she was an ordinary horse, I did not think much of her.

“She was racing around Parkes and Bathurst and not doing much so I thought I would just send her to Queensland to earn maybe $30,000 to get her over $100,000.

“The thought was to do that and bring her back and breed with her, but that was nearly two years ago.

“To think she would go on and win a Group 1 and to claim the Queensland Harness Horse of the Year after that start to her career, it is amazing.”

Cahill will make the trip north to Brisbane for her last Albion Park start this Saturday night.

In a fitting culmination of her career, Jeradas Delight will finish her racing days at Menagle with Jack Trainor – the driver and trainer who won the 2022 edition of The Golden Girl.

12 August 2022
Trial File Blackbook additions including two ready to race
The Blackbook is swelling and Trial File followers could enjoy instant returns with several eye-catchers about to race in coming days. Euroking steps out at Ballarat tonight for David Miles in the Dr Tom Dolan Pace and is given a good chance to add to his two wins from 25 starts after finishing strongly... 12 August 2022
Kelly looking for that next winner
It has been a while since multiple Group 1 winning trainer Bernie Kelly has trained a winner. Two years in fact. However, the 85-year-old mentor will be trying to change that today when he starts Nicholas Harris at Riverina Paceway. The three-year-old is the only horse Kelly has started this year and... 12 August 2022
SA Trots - Jawsoflincoln finds the winners circle again
IF YOU were caught by surprise during the second of last night's Australian Pacing Gold Sovereign heats in Kilmore, you can't say you weren't warned. Scoring with ease, South Australian raider Jawsoflincoln caused a minor upset with his victory. For trainer Greg Schoelfield, and those who... 12 August 2022
Cordina name strong in harness racing
The Cordina family has done so much for harness racing. Joe Cordina had such a passion for the sport as an owner, breeder and sponsor with his business Cordina Chickens continuing to support the industry to this day. His son Daniel has continued the legacy left by Joe but added a further dimension to... 12 August 2022
Allenby Lodge Stud - 70 Years Strong!
The famed South Australian breeding establishment Allenby Lodge Stud is celebrating its 70th year of continuous operation this year. Whilst renowned for its long tradition under the state’s legendary Norman family, modernisation and professionalism is not ignored and is part of the reason for the...