The Garrard family had a memorable week in Queensland harness racing with success on multiple fronts.

Chris (CJ) Garrard, the patriarch of the Garrard family, enjoyed feature race success at Albion Park on Saturday night, his son Daren tasted victory as an owner, a trainer and a breeder and grandson Angus drove a swag of winners at Redcliffe and Albion Park.

CJ is originally from Mullumbimby in the Northern Rivers of NSW and has recently started naming horses with the prefix Mullum.

And it was a pair of ‘Mullum’s’ that claimed the two-year-old double on Saturday night in both divisions of the QBRED Breeders Classic events.

Mullum Axel was the first winner, trained and driven to victory by Darren Weeks, leading throughout in the colts and geldings’ division, with the triumph made even sweeter with a $14,000 QBRED first win bonus.

Also bred by CJ, along with Nick Steele, Mullum Axel is by Changeover out of Rowan Franco.

The gelding defeated his stable mate Regazzo Di Tilly in the 1660 metre event, reversing the finishing order of a race at Redcliffe just three days earlier.

Regazzo Di Tilly, owned by CJ in partnership with his son Daren, is also a son of the Garrard-owned Changeover, giving the Garrard’s the one-two finish in the feature, in what was also a strong week for the Burwood Stud-based sire.

One race later and it was Angus Garrard in the bike to claim victory over 1660 metre for his grandfather with the Weeks-trained Mullum Ruby claiming the fillies division.

Settling in the running line while The Grogmother, for Nathan Dawson, controlled the tempo in front, when Garrard asked his filly to sprint, she let down powerfully to swoop by and claim victory.

As with the win of ‘Axel’, the win of ‘Ruby’ was also a maiden breaking victory, adding the lucrative QBRED first win bonus to the winning prize money.

The daughter of Roll With Joe was bought by CJ for what now appears a bargain $8,000 from last year’s Brisbane APG yearling sale.

Earlier in the week, R Eleven Art, which was bred by Daren Garrard but is owned by his wife Gayle, Chris and Louise Essex and David O’Halloran, set a new benchmark for the 2022 Trot Rods Series.

Driven by Angus, the three-year-old son of Artsplace made full use of the passing lane to burst through and stop the clock at 64.6 seconds, to claim Heat 9 to top the leader board for the Otto Tuza float presented to the trainer of the fastest winner at the completion of the 20 Heats.

Angus was able to land four winners at Redcliffe on Wednesday night, with Schooby, Eyedunno and Regazzo Di Tilly, the latter two both claiming a QBRED first win bonus with their victories.

The big week started on Tuesday when the three generations combined with the win of Catseye Beach at The Creek, the three-year-old Daren Garrard-trained gelding claiming a maiden breaking win for owner CJ, with Angus taking the reins.

There was a change at the top of the state premierships for both the drivers and trainers last week after trainer Jack Butler and driver Nathan Dawson relinquished the leads in their respective titles.

Having been the first trainer to reach 50 wins in Queensland, it was a lean week for the Butler stable with one victory in the previous seven days, Loorim Creek claiming his first Albion Park success on Friday.

Pouncing on the lead, courtesy of a Saturday night training treble, was Grant Dixon to bring up the half-century in the opening race of the night.

Recording his first win for 2022 after circumstances had not been in his favour this season, Bombadier Jujon eclipsed $100,000 in career earnings when driven to a passing lane victory by Trista Dixon. 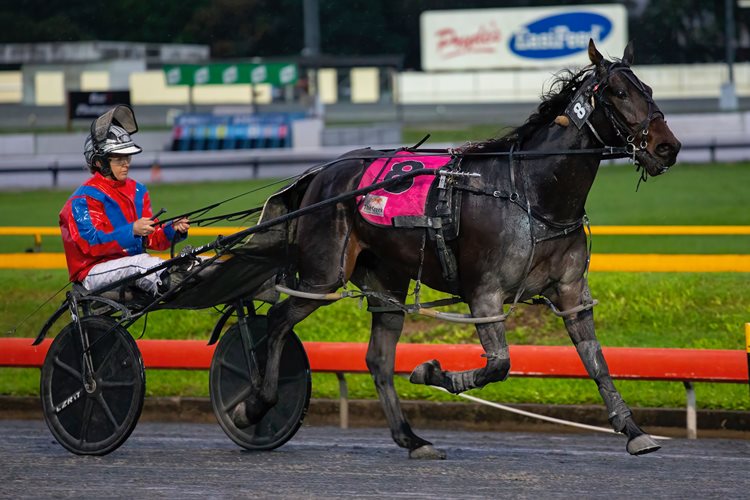 Moving into equal first place on 51 wins when Racy Roxy claimed the three-year-old fillies QBRED Breeders Classic, Dixon pulled one win clear in the final race of the night.

Completing a driving double, More Shades Of Gold was on his best behaviour to step safely from the tapes and lead throughout, taking Dixon to a one-win lead in the trainer’s premiership.

After trailing Dawson for most of this season in the driver’s premiership, the 2021 Australian Champion Pete McMullen made his move over the past seven days with 10 winners.

Claiming a treble on both Thursday and Friday at The Creek, McMullen rounded out the week at The Triangle with a Sunday night double for trainer Peter Greig.

Sitting on 95 wins a-piece after Saturday night, McMullen edged two clear of Dawson in the State Drivers title with a Redcliffe double. 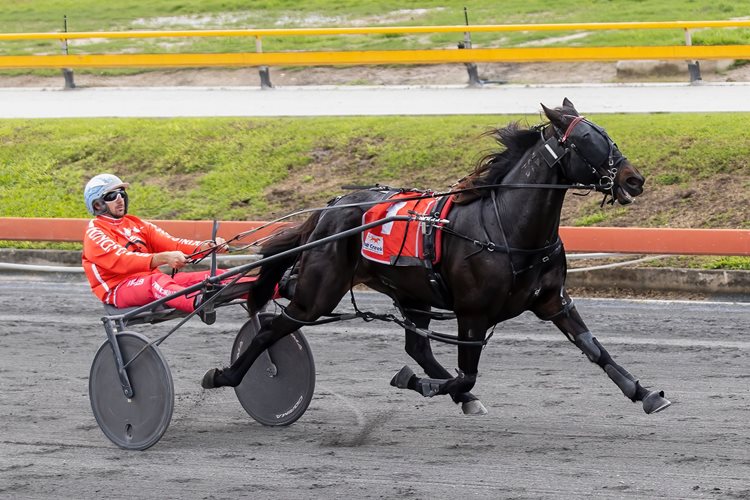 Once again, the cousins are also leading the National Driver’s title race, pulling clear of Cam Hart in the past fortnight, with bragging rights to be the first driver in the country to 100 wins for the season likely to be settled this week if their current strike-rates continue.

Prior to Friday’s Betavet 58-70 Final, there were four Queensland trained horses that had recorded a winning streak of five wins in season 2022.

Abercrombie Tab and Maywyn A Jug Ortwo, both trained by Dan Russell, achieved the quintet earlier in the season at Redcliffe, with Abercrombie Tab sneaking into the club with a dead-heat victory at the start of his streak.

Sumomentsomehwere joined the pair with an impressive Redcliffe victory on May 13 in a heat of the NR58-70 Series, to make it four wins at Redcliffe and one at Albion Park.

Last Wednesday at Redcliffe, the Kay Crone-trained Schooby joined the trio, making it five on the bounce, with all five of his wins also coming at The Triangle.

However, on Friday at Albion Park, Sumomentsomewhere established his own club, taking his winning streak to six in succession, being the only Queensland trained horse to reach the feat this season.

Trained by Shannon Price, the four-year-old has been super impressive since resuming from a long spell on March 8, having missed all his three-year-old season.

Finishing third to Alta Revelry at his return, the gelding has remained undefeated since showing great versatility with his performances in completing the six-pack of victories.

Adam Sanderson has been in the bike for each of his seven starts for the term, with his latest win coming when pressing on to find the front from gate 3.

After an opening half of 58.6 seconds, Sanderson was able to control the tempo with a steady 29.9 third split, allowing the gelding to close out in a 27.5 through the final 400 metres.

Owned by the Price managed Raboki Pty Ltd, the gelding is by Somebeachsomewhere, out of Raboki’s Group 1 winning mare Special Moment.

Hoofnote: On Saturday night, the stable mate of Sumomentsomewhere, Speak The Truth claimed victory in the QBRED Breeders Classic for three-year-old colts and geldings to take his winning streak to five.

Dannielle Veivers claimed her first winning drive since giving birth to her daughter Alisha when she scored at Albion Park on Thursday aboard Ima Birubi Boy.

Returning to the sulky on May 10, Veivers had been unplaced in three outings prior to her drive aboard the seven-year-old gelding which is trained by her husband Ryan.

From barrier one, Veivers opted for cover soon after the start of the 2138-metre journey as Artistic Saint burnt across from gate five to lead. 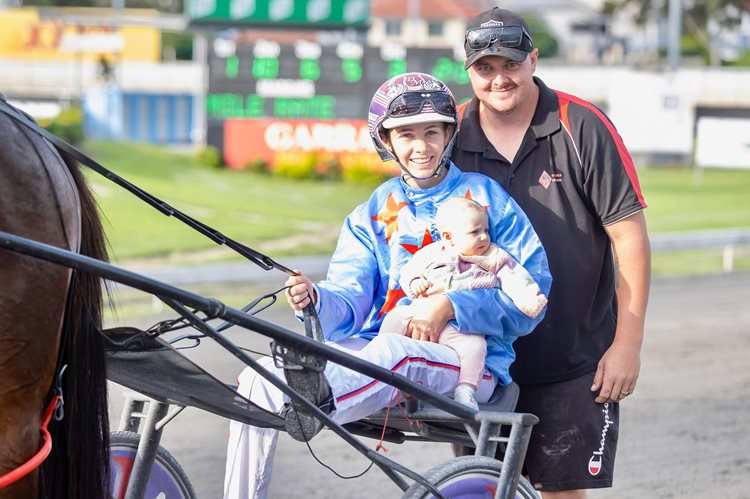 With Jordan Topping taking the drive aboard Artistic Saint and keeping a solid tempo in front, the first three quarters were run in 30.1 seconds, 28.9 and 28.8.

Swinging into the home stretch, Artistic Saint was starting to feel the pinch and, with the passing lane presenting to Veivers, she was able to angle the gelding to the inside and hold on for the return victory.

Charging home down the outside was stable-mate, Altana Blue, driven by ‘Aunty’ Taleah McMullen to grab second placing, three metres in arrears of her sister, to provide trainer Ryan with a winning quinella.

It was also a winning quinella for owners David and Peter Murray, the father-son pair sharing the ownership of both Ima Birubi Boy and Altana Blue.

Ima Birubi Boy has developed somewhat of an affinity with the Veivers stable, after claiming his 11th victory under Ryan’s care.

Dannielle’s last driving victory before taking time out of the sulky during her pregnancy was on Ima Birubi Boy July 2, 2021, while on January 26, he was Ryan’s first training winner following the birth of Alisha.

With six race meetings for the week in Queensland, just one of those will be held at Redcliffe but the meeting will capture plenty of attention with the 10-race finale of 2022 Trot Rods.

The driver draft for the Trot Rods will be covered live on Sky Racing 2 from 7pm on Monday, as the five selected drivers get an opportunity to choose the horses they partner in each heat.

On Wednesday, the first race will jump at 4.57pm and again will feature dedicated Sky Racing 2 coverage.

Drivers in the 10 heats will be trying to better the 64.6 second benchmark set by R Eleven Art.

A $10,000 bonus will be also awarded to the owners of the horse with the fastest time throughout the series.

Albion Park will host four meetings for the week, again stepping up to host a Thursday afternoon meeting alongside the regular Tuesday, Friday and Saturday metropolitan fixtures.

Marburg will host a Sunday afternoon fixture to round out the week. 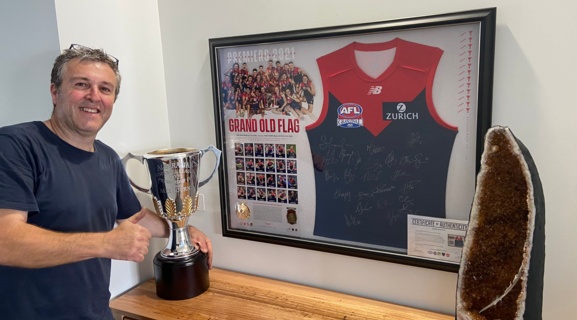 16 June 2022
Demon-mad Danny excited by Petracca and Oliver
High profile owner Danny Zavitsanos is a die-hard Melbourne fan in the AFL. So when the Demons last year won their first premiership since 1964, it was not hard to guess what the theme would be when naming his next batch of young standardbreds. 16 June 2022
Elephant rock ends spell for father and son
Father and Son duo, Don and Jeff Wegner teamed up in race 4 at Pinjarra on Monday, with Elephant Rock breaking through for his first win at just his eighth start in the race, giving the 53-year-old his first win in the cart in over four years. The win was also Don’s first training win in over two... 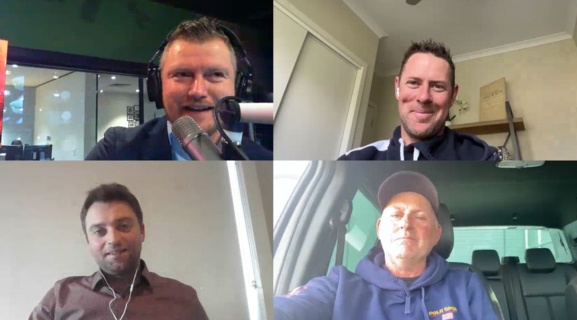 16 June 2022
Burning Questions: Jack's back for Melton deep dive
Nathan Jack will take the reins of emerging star Petracca among a big book of drives this Saturday night and he joined the Burning Questions panel to preview this weekend’s metro meeting from Tabcorp Park. Jason Bonnington, Tim O’Connor and Andy Gath were also there and the quartet took a...

16 June 2022
WA Media Guild Friday's Thoughts 17 June
With two of the WA Trotting Guild members away, it’s a smaller column than usual this week. However, despite the lack of numbers we will still endeavour to give punters the “good oil” at Friday’s Gloucester Park meeting. Guild president Wayne Currall believes punters can profit... 16 June 2022
Pizzuto's stable in form
Trainer Kevin Pizzuto heads to Penrith tonight one happy man. With two starters engaged at the meeting, the mentor is still elated after winning the Group 2 Treuer Memorial last Monday for the second year in-a-row with his pacer Loorrim Lake. Pizzuto was equally impressed with his other starter in the...