Matt Elkins was running hot to complete the week, claiming wins on Thursday, Friday and Saturday.

Heading to Redcliffe on Thursday for five drives, it was not until race nine and his last booking that he was able to return to the check-in as a winner.

That win came aboard the Vic Frost-trained Docta Feelgood who had put the writing on the wall that a win was imminent following a strong second placing behind Hemsworth in the Redcliffe Knights and Dames Final.

Sent forward from a wide gate to sit parked outside the leader, the Mr Feelgood gelding proved too strong, responding to Elkin’s urgings to claim his fifth career victory.

Unplaced at his next drive on Friday night at The Creek, Elkins had just one more drive to complete his engagements.

Taking the reins behind Im Loki for trainer and partner Narissa McMullen, the Elsu gelding was sent to the post as the favourite despite what appeared a trick inside second line gate.

Not risking the pocket, Elkins had the gelding off the inside soon after the start before making a move at the 1000-metres to bully his way to the front.

Once in control, Im Loki proved too strong for his opponents, easing down to a comfortable 10-metre victory.

The win was the gelding’s fifth since joining McMullen from just seven attempts, with Elkins taking the reins for each of those wins.

With just two bookings for Saturday night’s metropolitan fixture, it was a 100% strike rate for Magical Matty, winning with both drives.

Juddy Douglas was the first winner, the gelding that Elkins also trains, returning from a spell in perfect order to claim a division two qualifying pace.

Showing his customary early hustle out of the machine, Elkins soon had Juddy Douglas in front and setting the pace with a well-controlled 29.1-second opening quarter.

Dialling it up through a slippery 27.2 third split, the five-year-old was never in danger with over 11 metres to spare on the line in recording his third Albion Park success. 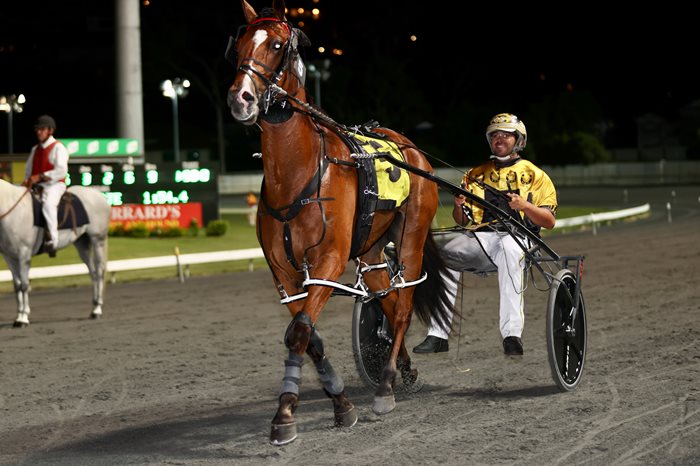 Just one race later, Elkins was back in the winner’s circle to make it two from two when scoring aboard Feelingforarainbow.

Settling in the pocket trail, Elkins drove the patient race and when the passing lane presented in the home stretch, took his shot, with the six-year-old finishing best to claim career win number 20, with nine of those when driven by Elkins.

The perfect end to the week pushed Elkins’ season tally to 11 driving wins, placing him equal second in the state driver’s premiership behind leader Nathan Dawson.

Although a resident of New South Wales, Craig Lusby had a close association with harness racing in Queensland thanks to his friendship with trainer John Boserio.

On Friday, January 21, Lusby passed away after a battle with illness, coming just one week after Rocknroll Times - a pacer he part owns and is trained by Boserio - was successful at Albion Park.

The pair had a long association and friendship through the hotel industry and in recent years had been enjoying plenty of success.

That association first shot to Group 1 glory back in 2005 when Four Trumps won the New South Wales Sires Stakes Final at Harold Park.

Going on to win 25 races before ultimately being exported to North America, Four Trumps placed third in the Gold Coast Derby and fourth in the Queensland Derby of 2006.

Fast forward 13 years and the Lusby-Boserio combination was back in Queensland chasing feature race success with Mistery Road.

After winning the first four races of his career before being unplaced in the Bathurst Gold Crown, Mistery Road was set for the QBRED Two-Year-Old Triad Final of 2019.

As can be the case with juvenile racing, Mistery Road met, what has turned out to be, a very strong QBRED crop.

With a respectable third placing, beating home fourth-placed Will The Wizard, the Mr Feelgood gelding was beaten home by future stars Expensive Ego and Governor Jujon.

The 2019 year may have produced some solid results, but it was 2020 that proved to be the year for Lusby.

With another Winter pilgrimage for Bathurst trainers John Boserio, along with another good friend Chris Frisby, the trip north proved to be highly successful, despite the Winter Carnival being slashed owing to the COVID pandemic.

Jenden Strike, a filly that Lusby owned in partnership with Allan Stapley and that was trained by Chris Frisby, was successful in the South East Oaks held at Group 2 status.

One month later and Lusby and Boserio would claim their second Group 1 together, 15 years after their first when Hes Sweet claimed the APG Brisbane Sales Graduate Final.

Wearing Lusby’s recently commissioned ‘The Grogfather’ colours, Dean Cernovskis was able to arrive on the wire to claim a narrow victory over the Grant Dixon-trained and driven Jasper.

With horses like Hes Sweet, Happy Publicans, Uncle Miki, Rocknroll Times and Mistery Road among many others, the legacy of Craig Lusby will continue on the track for some time. 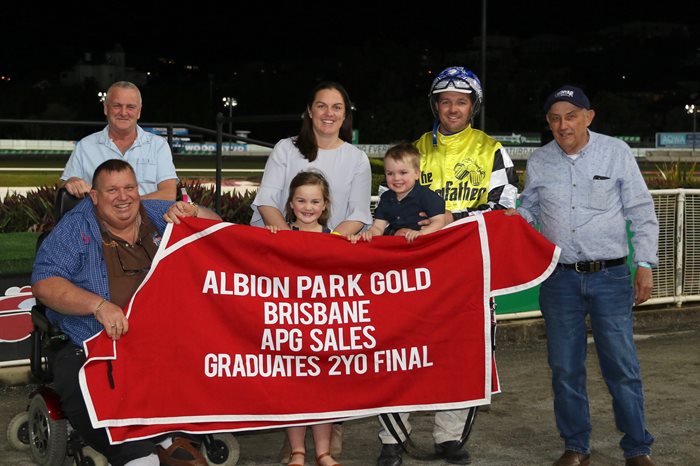 The first yearling sale of 2022 was conducted on Sunday with the Australian Pacing Gold Queensland Sale held at Gold Coast, with two new records set.

Lot 51, a Sweet Lou filly was the sales topper and after being knocked down to Brittany Graham for $100,000, became the highest priced yearling to sell through an APG ring in the Sunshine State.

Bred by Kate Baring, the daughter of Muscle Beach caught the eye of many pedigree students with the double cross of the mare Sweet Dahrlin in the third generation.

A stylish type that has been well-stamped by her sire Sweet Lou - a sire that traditionally leaves his progeny with big splashes of white - the filly ranks as a half-sister to five individual winners.

Heading to the sale with the filly high on the wish list, the bidding quickly headed towards six figures.

Jamie Durnberger-Smith was fresh off his Saturday night Group 1 Ballarat Pacing Cup victory with Spirit Of St Louis, but under the banner of Summit Bloodstock, taking second place meant he missed the prize.

Graham proved successful with the winning bid of $100,000 and the filly was headed to her father Darrel’s stable, to be prepared for her two-year-old season where she will be eligible for a raft of features, including eligibility for the QBRED scheme.

It may have been a long wait for those after a trotting bred yearling, but the second to last lot through the ring certainly was worth the wait for all involved, as interest was high for the impressive colt.

Bred by Lindsay and Mary Vagg, the colt is by the US stallion Volstead and with pre-sale interest transferring to the sales ring.

Bidding came to a halt at $95,000, eventually being knocked down to Darren Weeks, smashing the record for a trotting bred yearling passing through a Queensland sale ring.

With 28 of the 86 lots to pass through the ring on the day failing to meet the vendor reserve, the Vaggs bucked that trend by selling their entire draft.

With nine yearlings entered in the sale, the Vagg’s draft reached an aggregate of $357,000 for an average knock down of a tick under $40,000.

Complementing their $95,000 trotter was a $67,000 Always B Miki filly out of Exclusif and $34,000 for a Bling It On filly that was also awarded the best presented filly in the sale.

It has been a great start to the 2022 season for Bianca Hooper, with the Redcliffe based trainer landing a winning double on her home track last Thursday.

With a small team in work, from just five starters thus far in the season, Hooper has claimed three wins and a minor placing.

Presenting two horses on Thursday, it was the six-year-old gelding first onto the track when starting from inside the second line with Chris Petroff taking the reins.

Quickly away from the inside line as the field settled into position after the opening 300 metres, Petroff was able to secure the one-by-one trail soon after.

Angled wider approaching the home turn, Write Time had the closing speed to finish over the top and claim victory with a four-metre winning margin.

Write Time has thrived under the care of Hooper, with the latest win the eighth of his career and the sixth from just 12 appearances for Bianca.

Just one race later and it was a similar scenario with eight-year-old mare Regretable facing a second line draw with Chris Petroff in the bike.

From gate eight, Petroff again made the winning move early, this time able to squeeze in behind the leader from gate eight.

With the perfect trip behind the speed in transit, Petroff played the waiting game and despite the leader starting to feel he pressure, Regretable was able to find the passing lane in time.

Sprinting strongly once the gap arrived, the nine-year-old mare was able to dive through to secure the victory and complete the wining double for Hooper.

Mario Di Carlo, the owner of Regretable, part owner of Write Time and a loyal client of the Hooper stable also claimed a winning double with the win.

While the last training double for Hooper came back in October 2019, the start to 2022 and with the talented Our Boy Bobby close to a race return, the wait for the next double may not be as long.

Six race meetings will be held in Queensland this week with three fixtures from Redcliffe and three from Albion Park.

The week was started with a Monday night meeting from Redcliffe to complement the Wednesday and Thursday meetings.

Albion Park will host an eight-race card on Tuesday to be followed with a day fixture on Friday and then the Saturday night metropolitan card.

Saturday’s card will see some quality three-year-olds stepping out, with Group 1 winner Awaywego drawing favourably in gate one, with strong opposition likely to come from Bangkok Deejay.

The Band 4-2 Pace also looks a great contest with Governor Jujon drawing ideally in gate two with Deus Ex to follow the Gov at the start from the second line.