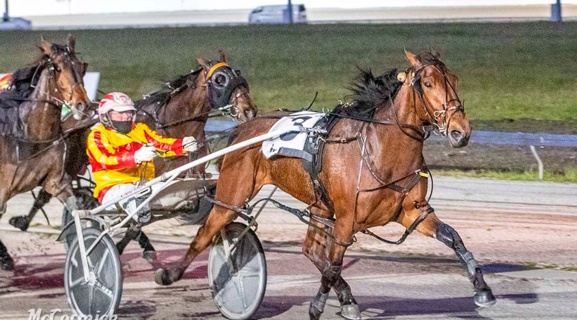 It was promised on TrotsVision and delivered in the run as Chris Alford guided The Pantheist to the lead from where she produced an impressive win in tonight’s Angelique Club Pace at Geelong.

Leg two of the Elizabeth Clarke Mares Triple Crown, which reaches its grand climax with next week’s $100,00 Bentsud Queen Of The Pacific at Tabcorp Park Melton, looked in the David Miles-trained mare’s keeping from the final bend as pre-race favourites Spellbound and Maajida failed to make in-roads.

And so it would prove, rewarding TrotsVision viewers who enjoyed exclusive insights courtesy of a roving reporter Gareth Hall’s pre-race chat with Miles and Alford, when they forecast the four-year-old would find the top and be very hard to beat.