On April 27, 2011, racing for the 249th and final time at Redcliffe in a career that would show 362 starts overall, Viking Jack was retired.

On May 9, 2021, that record was broken when Weasel stepped out for the 250th time under race conditions at the track known as The Triangle.

Weasel started his career in New Zealand with multiple stints in both New South Wales and Queensland before ultimately finding his way to the Caboolture property of John Kerr.

After going through the stables of seven different trainers, Kerr ended up with the pacer as an eight-year-old.

“John Ford owned the horse and said to me one day that I could have him,” Kerr explains.

“I told him ‘why would I want that horse?’ but he then said I could have him for nothing so I said I will take him and when he wins a race, I will give him $1000.”

After 111 starts already in his career, Kerr was the new owner and trainer of Weasel and set about asking the previous trainer, Richard Hooper, for some thoughts on the gelding.

“I said to Richard tell me about him and he replied ‘there’s not much to tell you other than I’m going to dance a jig because I am so glad, he is gone from my stable’,” he said.

“He also told me it is three-man job to put shoes on him.”

And according to Kerr, that basically sums up Weasel.

“He is an enigma that’s for sure,” Kerr said.

“Look at him over there, he knows I am talking about him and he will be working out a way to get me back for telling stories about him.

“When he was with Jarrod Alchin, they used to call him the trick pony; they reckoned he would stay awake in his box at night trying to think up plans of what he would do to you the next day.”

Weasel started his career in New Zealand on in May 2011 as a four-year-old with a second placing.

Winning at his second career start at Forbury Park with Dexter Dunn in the bike, the gelding would have one more start in the Shaky Isles before being exported to Australia to the stables of Jarrod Alchin.

His first Australian start was on September 1, 2011, where stepping out at Penrith over the 2125-metre trip he was able to score a first-up victory for his new connections.

With another six starts for Alchin, Weasel was able to win another three races before being sent for his first look at Queensland, joining the stables of Vicki Rasmussen.

It was a successful hit and run mission for Weasel where he was able to claim victory in both the heat and final of the Albion Park Members Cup.

Returning to New South Wales and off to another stable, the five-year-old was now in the car of Peter Russo where he would be for eight starts.

With two wins for Russo, Weasel was again headed to the Sunshine State, this time to the stable of Shane Sanderson.

After four unplaced efforts for Sanderson, it was back down the Pacific Highway to link up with the Wayne Dimech stable.

His 16 starts for Dimech netted one win and again it was off to a new stable, back over the Great Dividing Range to the Bathurst stables of Ashlee Grives.

After 10 winless starts with Grives, Weasel was headed North once again, and this time would join the stable of Richard Hooper.

On March 22, 2013, Weasel would again be successful in Queensland when winning over the mile at Gold Coast.

Quickly going back-to-back for Hooper within a week, Weasel would secure just two more victories between April 2013 and November 2014 for the Hooper stable.

His last appearance for Hooper was on November 5 and on November 20, 2014, Weasel stepped out at Redcliffe for John Kerr for the first time.

Since that first outing for Kerr, Weasel has raced on a further 244 occasions before his milestone on Sunday night.

And just like Richard Hooper told Kerr when he took Weasel, the gelding has been a real handful ever since.

Even now as a 14-year-old that has raced on over 350 occasions, Weasel still likes to let everyone know that he does things on his terms.

“He is just always perpetual motion, he is always wanting to move and keep going, I really think that is why he has that longevity, because he always just needs to be in the flow,” Kerr said.

You would expect a horse of that age would not need much work during the rigours of a weekly racing program, but that could not be further from the case.

Weasel is given the same vigorous track workout as any horse with Kerr, outlining that if he does not keep the work up to the veteran, he gets too hyped up.

While Weasel may have lost some gate speed over the years, he always gives everything on the track and does not look like losing the zest for racing anytime soon.

That has never been more evident than the past week, with Kerr taking Weasel to the Kingaroy Show, looking to qualify for the Garrards Showcase.

Despite his many tricks and vices, Weasel stepped cleanly as he always seems to do and was able to claim the Woodall Memorial Heat before the Finals were abandoned.

Kerr is a Show veteran, having been a regular over the years at the various events and is considering competing with Weasel at the upcoming Gympie Show.

Kerr only has a few horses in work, his horses are a hobby to enjoy and keep his days filled or as he states, “just to keep me ticking over.”

Ticking over is a nice status for Kerr, who was perilously close to not ticking at all.

Around 12 years ago, Kerr was involved in a sickening track-work accident and by all rights, he should not still be on this earth.

“I was working one and it went over, and it was nearly the end of me,” Kerr said.

“I was dead, I died on the track, but they managed to revive me before getting me to the hospital.”

Placed in an induced coma, the list of injuries is unimaginable with fractures to his neck, shoulder, jaw, ribs, 12 fractures of the spine, internal organ damage, punctured lungs, and valve damage on the heart.

Kerr’s wife was called to the hospital and told to say goodbye to her husband as the trauma specialist believed there was far too much damage to his body.

After three days, to the amazement of the trauma team, Kerr awoke from the coma.

“I couldn’t talk because of the tubes down my throat so motioned for a notepad,” Kerr explains.

“I was able to write down for my daughter, not as bad as it looks.”

From there began an amazing recovery and recuperation, and a long-term challenge to eventually get back to working with the horses.

It took Kerr five years to get back licenced and ever since, Kerr loves the challenges that horses can provide.

Just like when he was given the opportunity to take on Weasel, a horse that had provided headaches to many before Kerr decided to give him a go.

“You can buy a horse and win races, but I have no interest in that,” Kerr said.

Another two horses currently in the Kerr stable that were give-aways are Bertils Firefox and Bertils Delight.

On Sunday, Bertils Firefox was successful for the sixth time in his career after joining Kerr’s stable as an unraced maiden.

“I love the challenge it takes to win a race with a ‘reject’, that’s what I enjoy,” he said.

That challenge is more than just race day with Weasel, Kerr outlining that because he works on his own, he usually shoes the gelding over a couple of days - back shoes one day and front when he has enough energy to get back to them.

“I put music on before shoeing him, not to calm him down, to pump me up,” he said.

“Play the Rocky theme and then get out to do his shoes, he is like wrestling a crocodile.

“But that’s him, he just does what he wants to do.”

And after bringing up start number 250 at Redcliffe on Sunday night, how did Weasel travel home?

“He travels beautifully in the float after he wins, but he knows when it doesn’t go to plan because he will kick the float all the way home, Kerr said.

After his record breaking 250 on Sunday, Weasel might have been in a kicking mood after finishing second across the line.

However, he lost his position in the steward’s room - relegated to third - and Kerr also faced the wrath of the stewards, suspended for causing interference in the closing stages.

The fairytale victory for Weasel at his 250th Redcliffe start did not eventuate, but John Kerr would know more than most that life has twists and turns and the circle of life moves us all.

It seems prophetic, strangely reverent that Kerr should be the owner and trainer of the horse to break Viking Jack’s record of most race starts at Redcliffe.

Viking Jack was bred on John Kerr’s property all those years ago, when he stood the sire Son Of Viking. 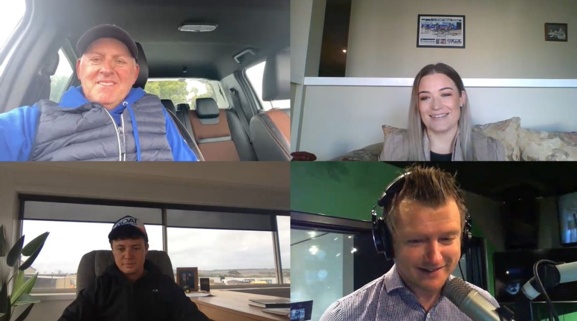