The Australian Pacing Gold sales and the Magic Millions complex on the Gold Coast have become a match made in heaven.

The annual standardbred yearling sale shifted from Albion Park to the Glitter Strip for the 2022 edition of the sales on Sunday afternoon and all involved have been blown away by the positive response for the venue change.

“That is a massive increase,” Baring said.

“We have seen the biggest and best inquiries on QBRED and Albion Park Gold eligible horses in the history of our time.”

The partnership between the Magic Millions, APG and Racing Queensland will ensure the future of the harness racing code into the future, Baring thinks, with APG keen to lock in a multi-year deal to host the sales at the venue.

The Queensland edition of the APG sales has come a long way in five years, according to Baring.

“The switch to the Gold Coast at the Magic Millions – thanks to the support of Racing Queensland – has created the richest and best sale of the 33 year history of APG,” Baring said.

“Queensland now has the highest average that has ever been seen for an APG sale anywhere in Australia, which is a record, we are really stoked about that.

“We want to thank the Queensland Breeders that produced and invested into the best stallions and the best families we have ever seen.

“It was an amazing sale and has really taken Queensland from five years ago being our worst performing sale in terms of location to becoming the number one Queensland sale in Australia.”

Champion trainer Tim Butt has recently made the decision to relocate to the Sunshine State and was busy at the sales on Sunday.

The winner of more than 90 Group 1s across his outstanding career in the harness game, Butt was pleased to pick up Lot 30 – a Bettors Delight and Get In The Groove filly – for $55,000.

“It was one of the best fillies in the sales I thought,” Butt said.

“The bonuses that are available and all the stakes they can race for, we get access to them here in Queensland, it is wonderful.

“We are pretty happy with what we have got so far.”

Butt was one of the newcomers to Queensland that was active at the sales and so were many of the existing stables.

Lot 51 – a Sweet Lou and Muscle Beach filly – topped the entire sale for the father and daughter Brittany and Darrel Graham combination, going for $100,000.

A Volstead and Sweet Pretense colt – Lot 91 of the sales – was the second highest price of the afternoon, going to the Queensland stable of Darren Weeks for $95,000.

Trainer Darren Weeks and driver Kylie Rasmussen have had great success at the APG Sales in recent years, grabbing boom youngster Cat King Cole, who has already gone past $100,000 in career earnings from just eight starts.

While the average sales price was well up, clearance rate was at around 70 per cent, which Baring says is a work in progress.

“That is something we need to look at as it is down from last year,” he said.

“More deals are getting done as we speak.

“However, we believe that reflects the outstanding QBRED for life bonuses and the race offering, as the vendors did have some high expectations for some lots.

“This is something APG will work on going forward, there is no question about that.”

While many interstate buyers made their way to the Gold Coast for the sale, many were able to purchase online, as well.

“We had the most interstate buyer activity that we have ever had for a Queensland sale, even with the challenges of Covid,” Baring said.

“We flew people to the Gold Coast for the sales as well as online bidding being at record levels for a Queensland sale.

“A lot of the interstate buyers said they would keep coming back to the sales in the coming years if they were held at the Magic Millions.

“Being at the Magic Millions complex takes harness racing to the next level.

“This sale will continue to lead the way in Australia for harness racing sales nationally.”

Graduates of the sale will be eligible for the $150,000 Group 1 Albion Park Gold Final to be run during the Constellations Carnival in 2023, which has become the third richest harness race in Queensland.

The majority of lots sold on Sunday are QBRED and will be  eligible for the big bonuses and features races on offer.
In recent years, the Queensland APG Sale has produced some of Australia’s best juveniles, including Muscle Factory and Expensive Ego, and continues to go from strength-to-strength. 22 May 2022
Mitch has a night out in Hobart
Brighton based junior driver Mitch Ford took driving honours at Friday night’s Hobart harness meeting with a driving treble, the second time in his short driving career that the 18-year-old has achieved the feat. Oneofthelads kicked off his winning run when scoring by a short-half-head in the Great... 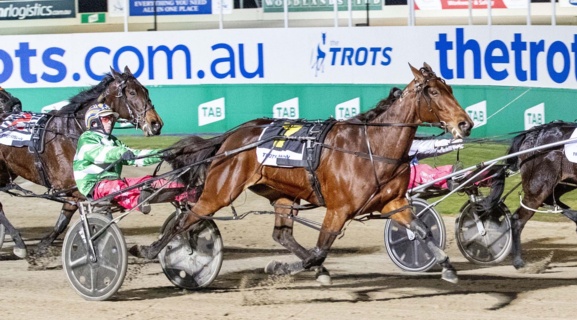 21 May 2022
Treachery emerges from the shadows with gutsy Group 3 win
She’s lived in the shadow of some more high-profile stablemates through the early part of her career, but Treachery showed she is a star in her own right with a brilliant win in Saturday night’s Allied Express Richmond Lass. The Emma Stewart-trained pacer chased home a string of top rivals... 21 May 2022
Every body loved Ray
IN WHAT is becoming a cliché, Australian Pacing Gold purchases are once again poised to dominate another rich feature Just as they have in recent years – including last season's Group Ones such as the New South Wales Breeders’ Challenge, Breeders’ Crown, Vicbred, Derbys and... 21 May 2022
Coastal features head down the Bass Highway
Conor Crook is almost Tasmanian harness racing’s latest $2,000,000 man. Last season’s leading driver looks set to his stake money earning past the mark in Launceston on Sunday night, as he prepares to embark on a move to Victoria late next month with a team of horses. Two of his horses set...