Tayla Gillespie is on track for her most successful season to date as a trainer following more success in the past week.

Continuing her run of success, Gillespie was able to secure a pair of wins for the week with Johnrod and Bourbonontherocks both arriving for victory in their respective races.

Since claiming a victory at Marburg back on September 5, Johnrod has had three further race starts, finishing second on successive occasions before his latest win at Redcliffe on Thursday, October 7.

Content to sit outside the leader, driver Matt Elkins was able to control the tempo from the breeze, sliding home to claim victory by over six metres.

With just the two horses competing at Thursday’s meeting, Gillespie and Elkins combined with Purple Shades who was able to finish in third placing and make it a worthwhile day at the races.

On Friday night, Tayla had just the one runner engaged, the square-gaiter Bourbonontherocks who was contesting race 9 on the card.

A runner-up earlier in the week at The Creek when chasing home for second behind Jansson, the eight-year-old mare was sent to the post as the race favourite from the big 50-metre handicap.

Safely into stride, driver Nathan Dawson soon had the mare in a stalking position one out and one back in the running line.

Waiting for the right moment, Dawson pulled the trigger at the top of the stretch and the tiny mare responded, fighting to the line for victory over a fast-finishing The Night King.

Gillespie has done a super job with Bourbonontherocks, with the mare holding her form following close to 12 months off the scene.

Since resuming from a spell back in July, the mare has now had 13 starts under the care of Gillespie, recording four wins and five minors and over $20,000 in stakes.

The win of Bourbonontherocks took Gillespie’s tally to 18 wins for the season, some good numbers as she mixes full-time work in aged care alongside her harness stable.

Season 2017/18 was the previous benchmark for Gillespie, leading home 21 winners that season, with her current numbers placing her on track to eclipse that mark.

With some of her team, the likes of El Gran Senor, Purple Shades, Prince Joy alongside Johnrod and Bourbonontherocks all racing in consistent form, season 2021 looks set to be the best yet.

Mark Dux was the recipient of a ‘holiday’ at Albion Park on Friday night after earning the ire of the stewards in the opening race of the evening.

Taking the reins aboard smart three-year-old Captain Nemo, Dux was handed a 12-day suspension for causing interference to Beef City Blaze at the 1800-metre point.

Scaling back his race driving commitments in the past two seasons following a health scare, Dux has developed a good relationship with Captain Nemo, with the win on Friday securing a perfect three from three record aboard the colt.

Despite the suspension souring the victory, overall, it was a good week for the Dux stable, leading home three winners for the week along with a Friday night double.

Joining Captain Nemo in the winner’s enclosure was Soho Casablanca, a superbly bred two-year-old that was having his second start since arriving in Queensland.

Essaouira, the dam of Soho Casablanca, is a full sister to the former QBRED star For A Reason who also sired a winner on Saturday night at The Creek with Delightful Reason.

Owned by long-time clients of the Dux stable, Soho Casablanca defeated the older horses with a smart all the way victory from gate one.

The win made it a pair of two-year-old winners for the week for owner Stephen Dux after the maiden win of the filly Alwaysbme on Tuesday.

Owned and bred by Stephen out of the mare Our Lillyfield, the filly is by the top first-season sire Always B Miki, with the win also securing the lucrative QBRED first win bonus.

Having recently taken over a pair of pacers to train under his own name, it did not take Dave McKenzie long to land his maiden training victory.

Arriving in Queensland to work alongside Ben Battle earlier this year, McKenzie has been able to take advantage of his relationship with the Hurst stable at Bathurst, with Brilliant Art and Tulhurst Lover sent North by the Hursts.

Arriving with five wins beside her name, Tulhurst Lover was initially trained by Battle who produced the mare in 10 starts to record three wins and a pair of minors.

McKenzie was the driver in all three of those Queensland victories and took over the training of the Rock N Roll Heaven mare following her last win for Battle on September 16.

After a fourth at her first appearance and then a second placing when second up for McKenzie, the seven-year-old continued her run of good form with a Redcliffe victory.

Eased from barrier four, Tulhurst Lover sat in the running line with McKenzie biding his time before pulling three-wide with 750 metres to travel.

Leading up the three-wide train with the race favourite securing the trail into the race on their back, the leader, Wild About Town, Tulhurst Lover, and Shes All Star pulled clear of the field.

Responding to McKenzie’s urgings, Tulhurst Lover prevailed in the run to the judge, holding on for a head margin and providing the maiden training success for McKenzie.

It has been a rapid start for McKenzie, with a win and two minors from just the six starters as he makes the most of his opportunities here in the Sunshine State.

Friday’s race meeting at Albion Park was successful for all three members of the Barnes racing family, with Al joining sons Hayden and Brendan with race night success.

Continuing from his solid performances the previous week, Brendan was the first to strike when scoring aboard Speak With Sam.

Stepping out in Queensland for the second time, the three-year-old was having his first Albion Park outing after a successful first appearance at Redcliffe.

Sent straight to the front, Speak With Sam was well-rated in front, cruising home for an easy win, setting a new career PB mile-rate with his 1.54.0 victory.

Big brother Hayden landed a pick-up drive with The Rocknroll King in the race and was doing his best work in the closing stages to grab second place.

That made it a Barnes brother quinella and a one-two finish for trainer Jack Butler who prepares both pacers.

In the last race of the night, it was Al Barnes that secured the best gift of the night when his trotter Father Christmas arrived for a stylish win.

Owned and trained by Al, the 10-year-old gelding settled at the rear of the field on the inside and was still positioned at the rear with 300 metres left to travel.

With Hayden driving a patient race, he angled to the outside in the home stretch to unleash a powerful finishing burst and arrive for victory.

Albion Park will undergo track remediation works this week, meaning the race calendar will be altered from a usual week in Queensland harness racing.

Redcliffe will host the Tuesday afternoon meeting, meaning the Peninsula Club will be the scene of three race meetings for the week.

Marburg step into the mid-week rotation to host the Thursday afternoon fixture.

Racing should be ready to return to The Creek on Saturday night with a 2138-metre Open Class event programmed as the boosted stakes event. 14 January 2022
Ready to Jiggy
In-form pacer Jiggy Rhythm will be looking to continue her good streak at Newcastle tonight. The Darren Elder-prepared pacer has had four starts for the Louth Park mentor for three wins and a second placing. Raced by a big syndicate of owners including Aaron Bain Racing and Summit Bloodstock, Jiggy Rhythm... 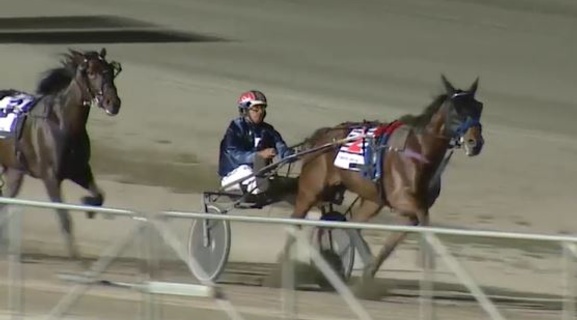 14 January 2022
All's well that ends well for APTS trotter who found his groove
Theyallendiny, an impressive winner at Kilmore on Thursday night, is a talented trotter who several trainers attempted to iron out, but it has been Lancefield's Rod and Joanne Petroff who have enabled him to reach his potential. The six-year-old has raced for the Petroffs on nine occasions for three... 14 January 2022
Elder's top effort
CHALKING up 89 winners as a driver in a season is a significant effort in anyone’s terms. That was the tally for Brad Elder in 2021, his best result since the 2017-18 term, when he drove 82 winners. But Elder fell just short of the goal that he set himself at the start of the year of landing a...

14 January 2022
Trial File: Little sister looks another shore thing
The little full-sister to one of the most exhilirating fillies Australian trots has seen in the past decade has given a hint on the trials circuit that she may well also be made of special stuff. Kiki Beach, Cyclone Betty's fifth successful foal for Fusinato Bloodstock, impressed in her trial at Cranbourne...