I Am Sparta became the first two-year-old winner for the new season in Queensland after scoring an impressive victory at his race debut on February 16.

Trained and driven by Darrel Graham, the colt franked some impressive trial performances when defeating the older horses to open his account.

The new National Rating system was in his favour after the previous system was not conducive for the young horses to compete against their older rivals early in their career.

Those changes meant that I Am Sparta was able to get to the races and land that first victory despite a lack of two-year-olds qualified and ready to race at this stage of the season in Queensland.

Starting a hot favourite, Darrel Graham sent the son of Shadow Play straight to the front to take any unforeseen circumstances out of play and make his own luck.

Luck was not required however, as the colt proved too classy for his older rivals when cruising home to an untouched victory by 20.1 metres.

A graduate of the 2020 Brisbane APG Sale, the colt is eligible for the Brisbane Group 1 Sale Series as well as the QBRED race features.

The $18,000 purchase price was quickly offset after his victory secured the $12,000 QBRED first win bonus on top of the race prizemoney.

Bred by Greg Mitchell and Burwood Stud, I am Sparta is the ninth foal of his dam Dontdrinkthendrive and the fifth winner the daughter of In The Pocket has produced to date.

The compact colt looked the ultimate professional in his victory and has been displaying ability through his educational and qualifying trials.

The next appearance for I am Sparta will likely depend on whether he can find a two-year-old race, with plenty of targets throughout the season on the radar following his debut.

The Newcastle Mile was shaping as a great spectacle with connections of Lochinvar Art looking to make the most of the opportunity on their path to the Miracle Mile.

His scratching from the race then looked to provide the Queensland-trained Turn It Up with the prime opportunity to force his way into the famous mile, and punters reacted to send the gelding to the post as an odds-on favourite.

However, it was not to be, and the Vicki Rasmussen-trained gelding will now have to regroup and try to win his way through one of the sprint qualifiers this weekend to stamp his ticket to the big dance.

Starting from gate 6 in the field of 7, Shane Graham was eager in the early stages to get across the field and after a brief challenge, restrained as The Black Prince kicked through to lead.

Making another challenge, Turn It Up was able to press to the front with a lap to travel after the opening quarter was set down in a slick 26.4.

Running the field through quarters of 29.5 and 27.7, Graham was trying to stave them off as they swung into the stretch, but they were unable to raise the effort to fight off the challengers, finishing in fifth place.

While victory and the two-week break into the Miracle Mile was the ideal path, all is not lost and Turn It Up still has an opportunity to earn entry to the $1million event.

Bertil Olsson has owned horses over an extended period, and last Thursday at Redcliffe was able to secure a double as an owner from his small team.

Placing his horses with different trainers to suit the horse, the Redcliffe double came through trainers John Kerr and Lola Weidemann.

The first win came via the four-year-old Bertils Watch Me; a gelding by Hes Watching that was also bred by Olsson out of the Fake Left mare Pinoshea.

Trained and driven by Lola Weidemann, the gelding was second-up from a spell at just his seventh career start when he was able to finish over the top of them in the closing stages.

The maiden-breaking win was made even sweeter with the gelding securing the $12,000 first win QBRED bonus.

Just two races later, John Kerr partnered Bertils Firefox to an all the way victory, with the five-year-old gelding claiming the third win of his career.

Another bred by Olsson, Bertils Firefox is by Rock N Roll Heaven out of the six-win Bertils Wildfire, a mare that has had four foals to race and all four are winners.

The win of Bertils Firefox completed the breeding/owning double, with Olsson having claimed an ownership double just once previous.

That came back in 2015 at Hobart when Vander Jenkins and Bertils Bliss were successful with both horses trained by Heath Szcyzpka and driven by Gareth Rattray.

In claiming victory, Bertils Firefox also added another milestone in the ownership history for Bertil Olsson; 100 lifetime wins as an owner was reached as Firefox crossed the line, a proud moment as an owner to reach triple figures.

Narissa McMullen was stuck on 999 wins for 20 days waiting to breakthrough to 1000 career wins, but it has been full steam ahead ever since the four figures were raised on February 5.

Driving in great touch, McMullen completed a treble at Albion Park on February 13 and bettered that on Saturday night when steering home four winners.

From six drives on the night, not only did Narissa claim four victories, but she also finished second with the other two drives.

It was the fourth quartet of her career and the second at Albion Park, with the other two coming at Redcliffe and Gold Coast.

However, the achievement was the first time at a Metropolitan meeting for McMullen.

The night started with a dominant and deserved win to Ideal World, a pacer she also trains that had finished second at each of his previous three starts.

The second win came courtesy of a pick-up drive aboard the classy Blacksadance when he was able to outstay his rivals in a tough victory.

Win three came aboard the Stephen Cini trained trotter Garland Greene - overcoming a 40-metre handicap - and the quartet was completed when Clarry claimed victory in the ninth event, also providing Cini with a double.

Very few female drivers have been able to score four or more wins at a Brisbane Metropolitan Staked card, with McMullen joining Kylie Rasmussen, Natalie Rasmussen, and Trista Dixon in the elite club.

Dixon stands alone with her five wins on January 21, 2017, the only time a female has driven five winners at a Queensland Metropolitan meeting.

Kylie Rasmussen has achieved four metro winners on four occasions, to lead the way for frequency amongst her female rivals.

Meanwhile Lola Weidemann is in a league of her own, having driven four winners on a card on 32 occasions and five winners on 6 occasions.

Six meetings are scheduled for decision this week with a Sunday afternoon fixture from Marburg the addition.

Heats of the always popular Marburg to Albion Series will be held for the NR 47-52 rated performers doing battle to secure a spot in the $11,030 Final to be held at Albion Park on March 6.

Always a great day of country racing, QBRED cash bonuses will apply to all races on top of the regular prizemoney.

Action from Albion Park this week will be the regular Tuesday, Friday, and Saturday timeslots.

Friday’s meeting will play host to the second round of heats of the Jim McNeil Memorial, where Orlando Jolt and Unknown Son gained maximum points when winning their respective round one heats.

Saturday Night sees a 3YO pace programmed for $14,060, another of the Ultimate Tools sponsored events with the winner to receive a rug along with vouchers to Ultimate Tools presented to the winning trainer and driver.

Redcliffe will host the other two meetings in their regular Wednesday night and Thursday afternoon slots. 27 February 2021
Group performers galore in Bathurst catalogue
A cavalcade of Group/Listed winning mares and winner-producing mares are represented by progeny in the 2021 Bathurst Gold Crown Yearling Sale, to be conducted by Graeme Board & Co at the Gold Crown Paceway on Sunday, March 21. Among the race-winning dams are the NSW Sires Stakes 3YO Final and Tasmanian... 27 February 2021
NSW: Ladies in the spotlight
TWO ladies caught everyone’s eye at Tabcorp Park Menangle last weekend. Now with the official Ladies Night of the Carnival of Miracles there tonight, Stylish Memphis and Anntonia are now primed to steal the show. After a solid second with gun three-year-old filly Anntonia in a heat of the NSW Oaks,... 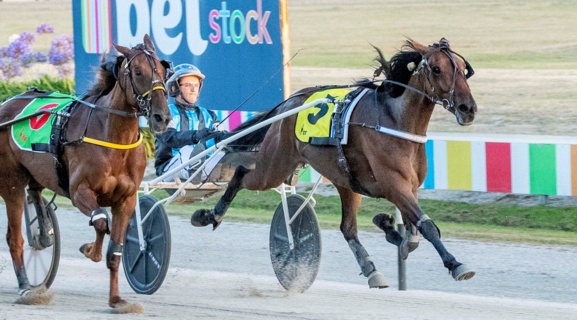 26 February 2021
Trots Centre: Zac upbeat on Grand Prix chances
Reinsman Zac Phillips stunned most when he flew the gate and found the lead in the Great Southern Star Final aboard outsider Magicool, and while his daring drive didn’t quite reap Group 1 dividends, he’s plotting more front-running tactics aboard the horse this weekend. After only being beaten...

26 February 2021
Industry news: COVID-19 protocols updated
Effective February 26, 2021, the following protocols are to be observed at all Victorian harness and trial venues.